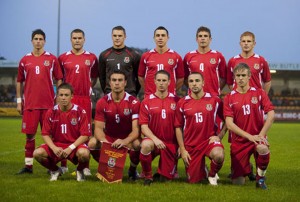 Scotland v Wales football match will be in 22.03.2013 at Glasgow, Scotland for UEFA World Cup Qualification Match. Scotland national Football Team is underachieving at World Cup Qualification group at the moment. They have played 4 matches and they couldn’t win any match yet. They got 2 loses and 2 draws. They got 2 loses in a row. They have lost against Wales and Belgium in their last two matches.  they have played against Wales in an away match and the match has finised with 1-2 score. I believe Scotland has no chance to qualify from group anymore. Macedonia, Belgium and Croatia are in form in their group. Allan Mc Gregor from Besiktas, Gary Caldwell from Wigan, Alan Hutton from Mallorca, James Morrison from WBA, Kenny Miller from Vancouver Whitecaps will be in squad. Darren Fletcher and Scott Brown will not be in Scotland squad for this match.

Wales National Football Team had won only one match in group stages and it was against Scotland National Football Team. They have beaten Scotland with 2-1 score in home. Now they will go for an away match to Scotland. Boaz Myhill from WBA, James Collins from West Ham United, Chris Gunter from Reading, Ashley Williams from Swansea City, Joe Allen from Liverpool, Aaron Ramsey from Arsenal, David Vaughan from Sunderland, Gareth Bale from Tottenham, Craig Bellamy from Cardiff City has been called for Wales squad.