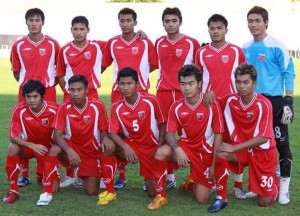 Myanmar v Guam football match will be in 02.03.2013 at Yangon, Myanmar for AFC Challenge Cup qualifies. Myanmar National Football Team is lucky that they will host tournament in their home because the team is playing well at home matches. Head coach Park Sung-Hwa has called a few new players against Philippines in their last friendly match and he has tried new players in national team squad. I believe it was very useful match for Park Sung-Hwa. However they have lost to match against Philppines. Their last two matches were against Philippines and they have lost both matches without scoring. (0-1, 0-2) and they have lost against Thailand with 0- 4 score. Myanmar performance wasn’t very good in their last three matches. I believe they will do anything for win this match for their supporters. I should admit that Myanmar is not very good at football but Guam is not better then them.

Guam National Football Team is standing 183th position in FIFA World Rank standings. Guam is a small island in Asia and people don’t expect much from them in this tournament. They couldn’t win their last three matches as same as Myanmar but they got a draw against Taiwan at the least. They have lost against Australia with 0-9 score and lost against North Korea with 0-5 score. Their players are generally playing at low leagues of United States., Philippines and local league of Guam. Jason Cunliffe from Pachanga is the most valuable player of Guam National Football Team. Shawn Nicklaw from HB Koge is also another valuable player and he is playing at defender position. Guam will need both players in this match. They may help them to get a draw in this match.

Match Prediction: Myanmar Wins, Less then 3 goals in the match