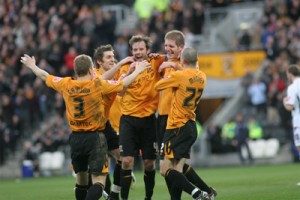 Hull City v charlton Athletic Football Match will be in 16.02.2013 at  Hull City for England Championship League. Hull City is going well in  England Championship League in this season and they may promote to Premier League at the end of season. They have won their last match against Derby County with 2-1 score as I have predicted. Now their opponent is Charlton Athletic. I don’t think that  their opponent Charlton weaker then Derby County, especially in away matches. Hull City wasn’t going well at home matches before Derby County match. They have played well football against Derby and I think they will do same against Charlton. Sone Aluko and Matty Fryatt are injured in Hull City squad and they won’t able to play against Charlton Athletic.

Charlton Athletic couldn’t win 3 matches in row in England Championship League. They have lost gainst Crystal Palace and Sheffield Wednesday and they got draw against Brimingham City in their last match. Charlton’s away performance is much better then their home performance and they got 6 wins 4 draws and 5 loses at away matches. There’s no injured nor banned players at Charlton squad at the moment.