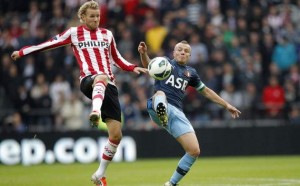 Feyenoord v PSV Eindhoven football match will be in 24.02.2013 at Rotterdam, the Netherlands for Eredivisie. Feyenoord hasn’t got expected results in past years but this year they are in title race. However the leader is PSV Eindhoven and there’s 6 points difference between PSV and Feyenoord. That will be an exciting match for football fans. I suggest you to watch this match. Feyenoord has faced two times with PSV Eindhoven in this year and both matches were in Eindhoven. Feyenoord has lost against PSV at away with 0-3 score in 23.09.2012 and Feyenoord has lost second match against PSV Eindhoven too with 2-1 score in Dutch Cup in 30.01.2013. Both match has finished with more then 2 goals. Terence Kongolo is lightly injured at Feyenoord squad and I am not sure if he will play in this match. There’s no other banned and injured player in Feyenoord Squad and they will be on the pitch with their ideal squad.

PSV Eindhoven didn’t lose any match in 5 matches in  a row in Eredivisie. They got a draw against Vitesse in away with 2-2 score and they have won their rest matches. If PSV wins this match they will out Feyenoord from title race and there will be less rival in championship race in Eredivisie. It’s an important match for both side and I believe we will watch many goals in this match. However PSV has a few problems with injuries and banned players in their squad. Mark Van Bommel (mid) and Atiba Hutchinson (def) are bannes in PSV Eindhoven squad and they won’t able to play against Feyenoord. Luciano Narsingh (st), Erik Pieters (def) and Ola Toivonen (mid) are injured at PSV Eindhoven squad and they won’t play in this match too. All of these players are squad players of PSV Eindhoven and PSV will feel abscense of them in this match.