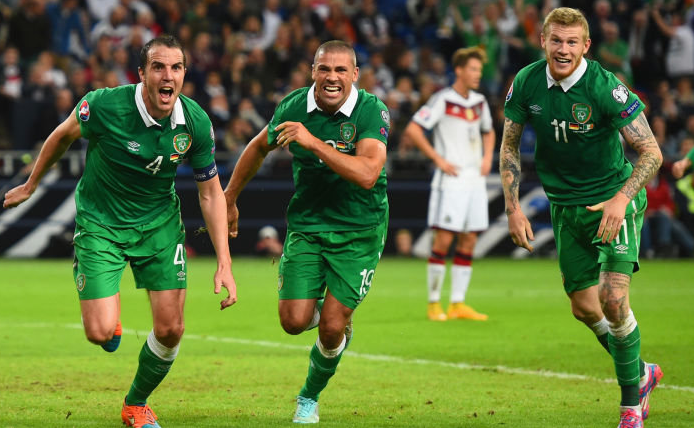 Republic of Ireland could sit back and be happy to be at Euro 2016. It was unthinkable for Martin O’Neill and Roy Keane’s men to even make the European Championship. They did just that, but they’re not interested in simply making up the numbers. In Group E, they will play Italy, Sweden and Belgium, and it’s clear they’re the massive underdogs according to fans and bookmakers. However, their squad has more talent than many outside the ROI camp probably realise. On top of that they have veteran knowledge from their coaches, and more importantly than anything, they’ll have the heart and desire that could help them to shock all of football this summer.

Here is their preliminary squad:

So, what can we expect from this group of players you ask? They will be in a group being called “the battle of the giants”, but they want to use their entire squad to prove they belong at the tournament.

They have players like John O’Shea, Robbie Keane and Darron Gibson that have a wealth of experience to offer the playing squad, and that could prove crucial. However, they have classy players like Seamus Coleman of Everton, Shane Long of Southampton and Jonathan Walters of Stoke.

This squad has plenty of English Premier League, and other elite domestic-league experience, offering the perfect blend for success. Perhaps more importantly, this squad has no world-class showmen. They are a team, full of heart, and effort, and there’s no doubt they’ll play for one another with each passing minute.

Kevin Kilbane, a former ROI player, believes that O’Neill and Keane, the coaches, could be more important than they realise. He explained “I think they will take a lot of the limelight away from the players. It is a good thing, in the build-up all the spotlight will be on Martin and Roy and the players will accept that.”

He further added “If in the build-up games there are some controversies, Martin has a master-stroke and can send Roy out – if the team has had a bad game it takes away in many respects how bad the team’s performance was. We have a good element there and it plays into his hands, he is a top manager and has a way about him.”

He admitted “We are up against it but the one thing in our favour is we have a settled side,”.

They are indeed settled, and they play for one another, putting each other first, not worrying about individual statistics.

Kilbane also alluded to this, saying, “It is not going to be an individual who gives us a bit of spark, it will be about how we combine as a team and play together.”

By playing as a team, full of heart and passion, the world might not expect a lot from them, but they’ll be as tough as they come over in France.

Group E should be rather interesting, right? ROI are there to compete, and not to make up the numbers. Take note, rival competitors.