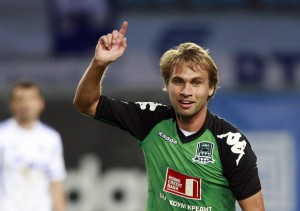 Krasnodar v Amkar Perm football match will be in 08.03.2013 at Krasnodar, Russia for Russia Premier League match. Krasnodar is generally playing well at home matches in Russia Premier League and They have just lost 2 matches at home whole in season and they got 7 wins and 1 draw. They have added a few new players their squad in winter and they have sold their best striker to Spartak Moscow. Krasnodar has sold Yuri Movsisyan to Spartak Moscow at winter. I believe it will affect Krasnodar offense at incoming matches. Yuri Movsisyan has scored 9 goals and made 2 assists for Krasnodar at 13 matches. Spartak Moscow has paid 7,5 million Euro for Movsisyan to Krasnodar. Krasnodar has two injured players in their squad and both players won’t be in Krasnodar squad in this match. (Isael and Andrey Snitsin) Isael was generally starting to match with starting line-up and they have scored 2 goals and made 1 assist for Krasnodar till now. Andrey Snitsyn is  main goalkeeper of Krasnodar and he won’t play football till June. Georgian goalkeeper Nukri Revishvili will replace him at incoming matches.

Amkar Perm is standing 12th position in Russia Premier League and their away performance is better then their home performance. Their overall league performance is not very good at the moment but I don’t also think that they will relegate at the end of season. Amkar Perm made a lot of changes in their squad in winter and they didn’t play enough friendly for fixing squad harmony problem. I believe Amkar Perm can lose a few matches in a row in the league. The things will settle a afew matches later for them. They have sold Marko Blazic, Stanislav Matyash, Sergiy Garashchenko, Pavel Ignatovich and Nikita Burmistrov. They have transferred Marwan Mohsen from Petrojet, Vladimirs Kamess from Liepajas Metalurgs, Maksim Kanunnikov from Zenit, Michel Braznanik from Slovan Liberec and Gianluca Nijholt from free transfer. I believe their addition their squad weren’t very quality transfers for Russia Premier League.