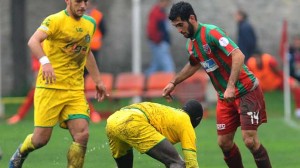 Karsiyaka is mid-table team of First League in Turkey. They are standing at 8th position in First League and they have still hope for promotion to Turkey Super League. Karsiyaka was in Super League for years ago but they couldn’t turn back for a while. Karsiyaka got 2 wins, 5 draws and 3 loses at away matches. They got draw against Ankaragucu in their last away match. Karsiyaka has hosted 1461 in home at 29.02.2012 and they won that match with 1-0 score.