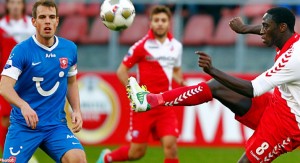 Utrecht v Roda Kerkrade football match will be in 24.02.2013 at Utrecht, Holland for Eredivisie. Utrecht is a mid-table team of Eredivisie and I believe they will promote to play-off rounds for Europa League at the end of season. They have quality squad and they deserve it. Sometimes they get surprising defeats at league but I should admit that they deserve more then they are in standing table of Eredivisie. After winning streak of Utrech in Holland they have lost against NEC and PSV. They couldn’t win 2 matches in a row. Now they will host Roda Kerkrade at home. Their opponent is fighting against relegation in the league. Utrecht has many injured players in their squad and these injuries make things harder for Utrecht in this match. Nana Asare (mid), Adam Sarota (mid), Dave Bulthius (def), Marcus Nilsson (def), Yoshiaki Takagi (st) are injured at Utrecht squad. These are squad players of Utrecht and 6 important players of Utrecht won’t be in this match. No… No.. Actually 7! Anouar Kali (mid) is banned and he won’t be in Utrech squad in this match too. Good luck to Utrecht…

Roda Kerkrade is fighting against relegation in Eredivise and their fans are unhappy because of that. The strange thing is Roda Kerkrade didn’t lose 8 matches in a row in Eredivisie. They could only win 2 matches and they got 6 draws. They got good results strong teams of Holland. I believe they will get result against Utrecht in this match too. Krisztian Nemeth (st), Davy De Beule (mid) and Adil Ramzi (mid) are injured at Roda Kerkrade squad and they won’t play against Utrecht.