Tobol v Lokomotiv Astana football match will be in 09.03.2013 at Kostanay, Kazakhstan for Kazakhstan Premier League. 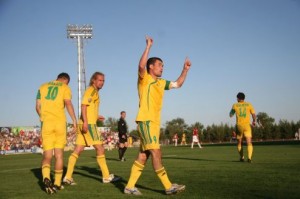 Tobol FKA new season has started at Kazakhstan Premier League. Shakhter Karagandy was champion of last year. Tobol had the best home performance, Shakhter Karagandy had the best away performance at Kazakh league. Tobol couldn’t qualify to Europe competitions cause their bad away performance last year. Tobol has made many changes in their squad this year. They have released many players to another teams and sold some of them. They have released Serbian striker Nemaja Jovanovic, Sergey Kontsevoj and Ali Aliev. They didn’t lose important players from their squad. Their only good addition their squad was Ethiopian Midfielder Yussuf Saleh from Syrianska. He had a good performance last season with Syrianska and he will be a a good htransfer for Tobol.

Lokomotiv Astana has finished 5th position to Kazakhstan League last season. Just there were 1 point difference between Tobol and Lokomotiv Astana in the league standings. Lokomotiv Astana’s last away match against Tonol was 15.04.2012 and Tobol has won that match with 3-2 score.

Match Prediction: More then 2,5 goals in the match, Tobol wins