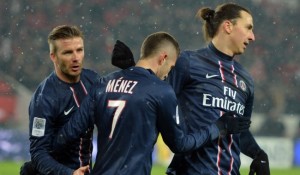 PSG v Barcelona Football Match will be played on 02.04.2013 in Parc des Princes (Paris) for a UEFA Champions League match. Wolfgang Stark will be the referee for this match.

Paris Saint Germain are currently first in the Ligue 1 table. Their last 5 matches in the Champions League has been really good, they haven’t lost a game in 6 matches in a row with 1 recent draw against Valencia, which ended in a 1-1 draw.

PSG key players are Z. Ibrahimovic, D. Beckham, M. Verratti and J. Pastore. David Beckham could be starting this match and will be one of the key players to watch out for. This match will be really tough for PSG. The back four will need to be solid and their forwards will need to take their chances if they were to win the first leg. Since PSG are playing at home in the first leg, they will be looking to win this match or they will just make it tougher for themselves when they go to the Camp Nou.

Barcelona’s last 5 matches in the Champions League has not been that good. They lost to Celtic, drew with Benfica and lost to Milan with a 2-0 scoreline playing away in the first leg. Barcelona managed to beat AC Milan at home by 4-0 and managed to overcome them in the 2nd leg to go through. They will be favorites to win this match even though they are playing away. Messi, Iniesta, Xavi are their most key players in this match. Can PSG defenders keep Messi at bay? we will have to see.

I predict Barcelona will win this match with Messi on the score sheet but this game will not be easy for Barcelona.