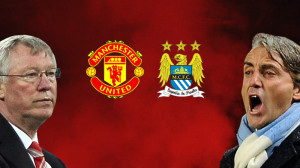 Manchester United v Manchester City Football Match will be played on 08.04.2013 at Old Trafford, Manchester for a Premier League Manchester Derby match. Mike Dean will be the match referee.

Manchester United are top of the Premier League table with 77 points and are leading Manchester City by 15 points and will most likely win their 21st domestic title. Van Persie haven’t scored in 9 matches and will be looking to end that against Manchester City whom, he managed to score the winner when they played them away with a 2-3 scoreline beating City. Man Utd’s form has been brilliant, they are unbeaten in 18 matches and unbeaten in 24 home matches in the Premier League and will be looking to extend this run of form. Their last home game they lost was back in September 2012, when they lost to Tottenham Hotspur with a 2-3 scoreline.

Manchester City sit in 2nd position with 62 points. They haven’t been as good this season compared to last season, where they won the title.

In their last 5 matches they have won 3 of them and losing twice. Both of their losses was playing away matches, losing to Southampton 3-1 and Everton 2-0. In their recent match, they thrashed Newcastle 4-0 at home. They will be looking to avenge their 2-3 loss when they last played them in the Manchester Derby.

This match will be hard to predict as both teams are good. The statistics shows you that Manchester United are better with their unbeaten run of matches. Man City will most likely play at their best level, as they will be looking to avenge their loss. Man Utd wouldn’t really mind if they lost this match, because they will still be a lot of points a head. I think this match will end in a draw but I am positive both teams will score.