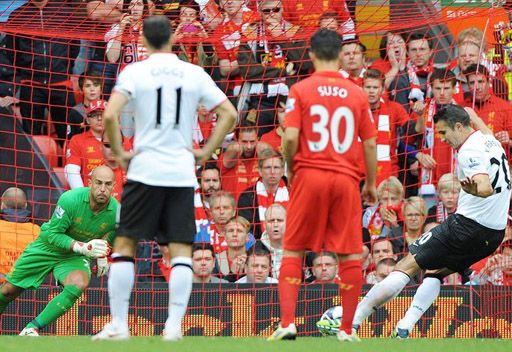 h an influx of new arrivals, has created fresh optimism and hopeThe scale of Bournemouth’s meteoric rise in recent years will be realised when they walk out onto the pitch at Anfield in their upcoming game against Liverpool in what promises to be an intriguing fixture. From being on the brink of exiting the Football League, Eddie Howe’s team have risen up the lower divisions and now proudly sit in the Premier League for the first time in their history. They were undoubtedly the standout team in the Championship last season as their stormed their way to the title through an exciting brand of free-flowing, attacking football that was a joy to watch.

It remains to be seen whether the step up to the Premier League will be the making or breaking of Bournemouth, but one thing is for certainly – they are not in the top flight to make up the numbers. A meeting of two attack-minded teams is perfect for any to-win-and-both-teams-to-score coupon, with Liverpool (21/10) and Bournemouth (14/1) representing extremely good value considering both side’s ability to score and question marks over their defensive solidity. The Cherries will not stand on ceremony or change the way they play in their efforts to defy the bookmakers and remain in the Premier League, but they will have to be at their very best to stand any chance of leaving Liverpool with a positive result.

A strong pre-season, combined with an influx of new arrivals, has created fresh optimism and hope that Liverpool could be serious Premier League contenders in 2015/2016. Philippe Coutinho’s wonder goal proved to be the difference in what was a scrappy, disjointed game at Stoke where Liverpool did not really get into their stride but still managed to avenge their 6-1 humbling at the same stadium in May.

Brendan Rodgers will be under pressure to deliver all three points on his team’s first game on home soil, but Liverpool cannot afford to take Bournemouth lightly by any means. A professional performance at both ends of the pitch could be enough to see Liverpool through, although fans will expect to see an exciting brand of football with the likes of Coutinho, Roberto Firmino and Christian Benteke in their starting line-up. The early weeks of the season will provide an indication as to whether the latter fits into the way Rodgers likes to play, but scoring on his home debut would be the perfect start to the big Belgian’s career at Anfield. He will undoubtedly lead the line again with Daniel Sturridge out until September with continuous injury problems and Mario Balotelli completely out of favour as he nudges ever closer to the exit door.

Bournemouth showed numerous signs of why they are in the Premier League during their opening day fixture against Aston Villa which, on another day, they could have won. Instead, they were undone by a fine header from debutant Rudy Gestede who scored just thirteen minutes after coming on as a substitute. The Premier League debutants will quickly discover that the top flight is an unforgiving league in which failing to take chances can come back to haunt them, but there were enough positives to suggest Howe’s men could surprise a number of teams this season.

Approaching the upcoming trip to Liverpool with a ‘nothing to lose’ mentality may be the best way for Bournemouth to play their own game and give it a real go, but they must not give their opponents too much respect and be star-struck by the experience of playing at Anfield. The absence of star midfielder Harry Arter could be a big blow to Bournemouth’s chances, but in Callum Wilson they have a young striker who could really make an impact in the Premier League and be a real handful for Liverpool’s defence.