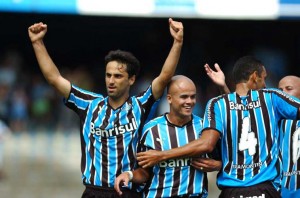 Gremio v Caracas FC football match will be in 05.03.2013 at Porto Alegre, Brazil for Copa Libertadores match. Gremio getting interesting results at Copa Libertadores this year. They have lost against Huachipato at home and they have surprised everyone at Brazil and they have beaten Fluminense at an away match and they have surprised everyone again. I believe we won’t surprise in this match. Gremio is not going well at Brazil Gaucho League. They got 4 wins and 4 loses in league match. They have won 3 and lost 1 matches at home. I think they could do better then this in the league.

Caracas FC is a Venezuelan team. They have lost their first Libertadores Cup match against Fluminense in this season. In second match they managed to beat Huachipato at away and they got a deserved victory in Chile. Their opponent is one of the strongest teams of South Africa but Venezuela football is already growing at South America. Venezuealans love to do surprised when they are underdogs in football…