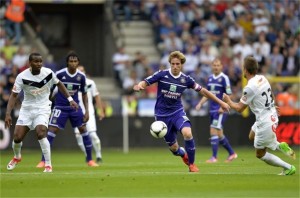 Club Brugge v Anderlecht football match will be in 24.02.2013 at Bruges, Belgium for Belgium Pro-League. Club Brugge is underachieving at Belgium Pro-League and the moment and that made their fans unhappy. They are far from title race at the moment. Actually there’s not a title race in Belgium anymore. Everyone know who will win to title but the question is who will be runner-up? Club Brugge is standing 6th position in the league at the moment and the club having worst days in Belgium League in their history. Club Brugge didn’t lose 7 matches in a row in home but it will be too hard for them to fix things in play-off. If they lose this match they may lose play-off chance at the end of season. There’s no banned or injured player at Club Brugge squad at the moment. This is the most important match of Belgium and I am sure they will do anything for winning this match.

Anderlecht will win to title at the end of season, I believe… Their home and away performance is the best in Belgium Pro-League and they will try to keep their performance incoming matches. They have won 8 matches, got  3 draws and 2 loses at away matches. They have also won 3 matches in a row in away but it’s always hard to guess result of Club Brugge v Anderlecht matches. Anderlecht has beaten Club Brugge 6-1 at 11.11.2012. That was memorable match result of Anderlecht history certainly. There’s no injured or banned players in Anderlecht squad.

Match Prediction: 4-6 goals at total in the match