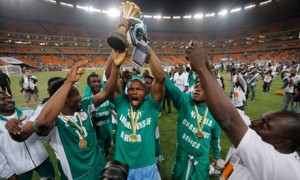 Nigeria won Africa Cup of Nations title today after match against Burkina Faso. Nigeria National Football Team played good team football in whole championship and they deserved to earn Africa Nations Cup. Congratulations to Nigeria. Nigeria has beaten Burkina Faso National Football Team in Final with 1-0 score. Nigeria has scored only goal in 40th minute with Sunday Mba and they lead to first half. Burkina Faso has attacked to Nigeria goal in second half but both teams couldn’t score any goal. Nigeria won title 19 years later…

Nigeria v Burkina Faso football match will be in 10.02.2013 at South Africa for AfricaCup of Nations 2013 Final. The match will start at 18:00 with GMT. Nigeria made a good surprise in their quarter final match and they have beaten Ivory Coast with 2-1 score. They have also beat Mali in Semi Final with 4-1 score and they deserved to play final match against Burkina Faso. I wasn’t expecting them to promote final in Africa Cup of Nations but I knew they had capacity to do that. Joseph Yobo from Fenerbahce, Efe Ambrose from Celtic, Ogenyi Onazi from Lazio, Mikel John Obi from Chelsea, Victor Moses from Chelse and Ikechukwu Uche from Villareal are the most valuable players of Nigeria. Their squad quality is really high and they have came to final with good football display. Congratulations to Nigeria.