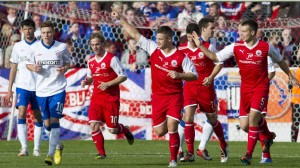 Stirling Albion v East Stirling football match will be in 05.02.2013 at Stirling,Scotland for Scotland 3rd League Match. The match will start at 19:45 with GMT. Stirling Albion is not going well in Socttish third league at the moment. They are at the bottom of league table at the moment. They have played 9 matches in home till now and they won 4 and lost 5 matches in home. They didn’t get any draw in home matches. Their opponent is is 9th position in the league now and if they want to get rid of 10th position, they need to win this match. They have won 2 , lost 3 matches in their last 5 matches in home