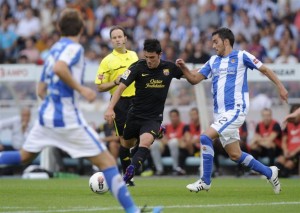 Real Sociedad will face with Barcelona in 19.01.2013 for Spanish La Liga. Real Sociedad couldn’t win against Deportivo La Coruna in their last home match and match score was 1-1 at the end of match. Besides Deportivo had a red card in 64th minute. Real Sociedad is playing good team football and they tend to score in every home matches. There’s no injured or suspended player in Real Sociedad squad at the moment. If Markel Bergara and Alberto de la Bella has a yellow card in this match they won’t play next week.

There’s nothing to say about Barcelona really. They are awesome, legendary, superb, a good team… I think words are not enough tell how they are good. You can’t tell them, you just watch them. Eric Abidal, Isaac Cuenca, Marc Muniesa and Sergi Roberto are injured players in Barcelona squad but these are substitute players, so no problem for Barça.