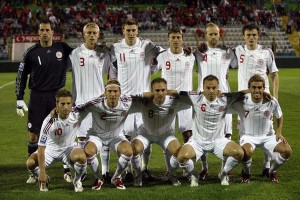 Mexico National Football Team will face with Denmark in 30.01.2013 at Phoenix, Arizona, USA for a friendly match. Mexico National Football Team’s head coach Jose Manuel de Torre has been called-up experienced players generally for this friendly match. However he didn’t called-up their famous and valuable players. Javier Hernandez, Giovani dos Santos, Jonathan dos Santos, Andres Guardado, Hector Moreno and Guillermo Ochoa hasn’t been called squad. These players were the most important players of Mexico. However players who are playing for Mexican Teams can still replace them. Cirilo Saucedo and Raul Jimenez firstly called up for national team by Jose Manuel de Torre. Mexico is the best team of CONCACAF surely. They got 2 wins and 1 lose in their last 3 friendly matches. They have beat Brasil and Bosnia and they have lost against USA.

Denmark National Football Team is going on their visit in North America. Now they will face with Mexico and it will be a hard match for them. Denmark has met with Canada National Football Team in Tucson, Canada and they have won 4-0. It was because of poor performance and unexperienced squad of Canada. Canada also got a draw against Turkey 1-1 and lost against Slovakia in their last friendly matches.