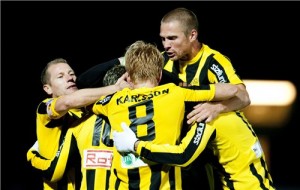 Hacken v Falkenbergs football match will be in 02.03.2013 at Gothenburg, Sweden for Swedish Cup match. Hacken has finished to league at 2nd position in Sweden. That was quite dissapointing for them cause they have lost to championship with 2 point difference in the league and they lost to chance for playing at Champions League next year. Hacken has signed a few good players this season. They signed Liberian defender Jimmy Dixon, defender Fredrick Bjorck and Defensive Midfielder Reuben Ayarna. However they have sold to Majeed Waris to Spartak Moscow. It hurted Hacken’s supported alot cause he has done many good jobs at BK Hacken last year. All the same  I believe new transfers will be usefeul for Hacken Squad. Hacken has beaten Akarps IF in first round with 3-0 score at away. Oscar Lewicki is injured at BK Hacken squad and he won’t be on the pitch against Falkenbergs. There are good players for replace him. So this injury won’t affect to Hacken’s performance

Falkenberg is a second division team Sweden and that’s unfortunate for them that draw with Hacken in this round. Besides they will play at away.There are too much squad quality difference between Hacken and Falkenbergs. Falkenbergs came to second round with winning against Kristianstands FF in away with 3-0 score. Both teams love to score but Falkenbergs loves to concede too. Main goalkeeper Jesper Hansen is injured at Falkenbergs squad and he won’t play in this match.