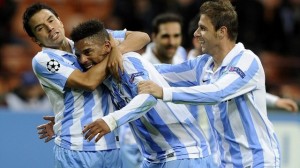 Eibar didn’t lose any match in home yet and they able to got a draw against Athletic Club homa match in Spanish Cup. Eibar also performing well in Spanish Segunda division. If they keep their performances we will able to see them in Primera league next season.

Malaga is performing well in Champions League, La Liga and Spanish Cup. They will want to get an advantage against Eibar but I don’t think that they will win because I believe Malaga’s head coach will make rotations for this match in squad.

Match Prediction: There will be 2-3 goals in the match.