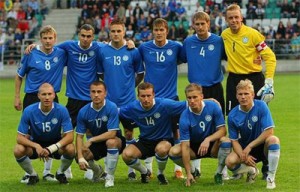 Estonia surprised all soccer fans in Euro 2012 qualifications and they got 2nd place in group stages. They also surprised us via losing against Faroe Islands. (0-2) I believe it was an accident for Estonia. There are the Netherlands, Turkey, Romania, Hungary and Andorra in their group. Hungary, Romania and Andorra performances weren’t very good last years. I believe they can surprise us in World Cup Qualifications again. In their first match they will meet with Romania in their home. Let’s see what will they do in this match.

Estonia doesn’t include any star or promising young player in squad. They played good team football and made good counter attacks in Euro 2012 qualifications. I believe they will do it again incoming match. Estonian goalkeeper Sergei Pareiko is playing for Wisla Krakow in Poland League. His performance is very good but he is getting older anymore. I think Wisla will be last club in his career. Ragnar Klavan is another important player for Estonia. He is playing for Augsburg in Bundesliga. He is 26 years old and playing in defence position.I still can’t believe how did they manage to pass Serbia and Slovenia in Euro 2012 qualifications with this squad. They just did to impossible and they gained sympathy of many people. I don’t know if they can do that again.

Romania performance has dropped last years. They couldn’t do what people expected from them. After Hagi, Petrescu, Popescu quit to football, Romanian football started to fall. Romania just won 3 matches and got 5 draws in Euro 2012 qualifications. I think the same thing will happen this tournament too. I believe Holland and Turkey will be top of standings and Romania will stand in third position. It depends Estonia’s performance too. We may have an idea what will happen after this match.

Gabriel Torje (attacking midfielder) is the most important player in Romania squad. He is playing for Granada in La Liga and he was substitute in all matches of Granada. I believe sitting on the bench will affect his performance negative. Right defender Razvan rat is already captain of Romania National Team. He is playing in Shakhtar in Ukraine. And another important man of Romania is Raul Rusescu… Not many people know him but he is a quite good striker. If Estonian defenders can handle him they will get result againt Romania. If they can’t Romania will win to match certainly. He scored 6 goals and made two assists in league matches.

Match Prediction:
It will be hard match for both sides but I believe that Romania will win this match.