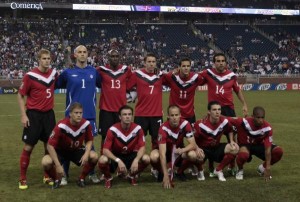 CONCACAF World Cup Qualification Stage just started one year ago. Canada didn’t lose any match yet. That’s because they didn’t play with any serious opponent untill their last match. They played against Honduras in their home and they got a draw in last match. Honduras doesn’t have very quality players but they are always a serious opponent. Many people love football in Honduras. Generally people don’t interest with football in Canada. Canada won 5 of 8 matches in qualification rounds. Now they will face with Panama in their home and they should win this match if they want to qualify next round. Otherwise their schedule will cause them problems. Because there will be two important incoming away matches for them. Canada got two draws and 2 wins in their home in 2011-2012.

Eintracht Frankfurt’s striker Olivier Occean and Norwich’s Striker Simeon Jackson scored 5 goals in 8 matches. Both players are key players of their team and they are playing well. Atiba Hutchinson (midfielder) is already another important player for Canada Squad. He played 4 matches for PSV this season and he made 2 assists. These players performance will affect to match and their performance is good at their leagues.

Note: Joshua Simpson was playing well for Canada in qualification matches. He scored 4 golas and made several assists. However Canada Manager didn’t call him against Panama.

Panama didn’t lose any match in qualification rounds as same as Canada. Actually they won all their matches and if they can win this match, I am sure they will qualify next round. They beat Honduras in away match and this win gave them an advantage after Canada draw with Honduras. However I don’t think that Panama’s squad has enough quality to win an away match against Canada. I am sure it will be a good match because both sides want to win.

Blas Perez is very important player for Panama National Football Team. He scored several goals in qualification matches. He also scored 5 goals and made 4 assists in 15 league matches. He is playing for FC Dallas in MLS. It seems there’s not any other quality player in Panama Squad. There are Luis Henríquez from Lech Poznan, Gabriel Gómez from Philadelphia Union but I am not sure they will be enough to affect this match.

Canada will win to match with their more quality squad then Panama.